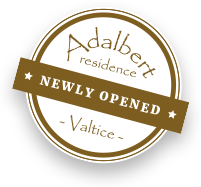 Pension Athanor is located on the picturesque Plešivecké náměstí, only 300 meters from the historic center of Český Krumlov, which has been a UNESCO World Cultural and Natural Heritage site since 1992. Winding streets, romantic hideaways, and a unique complex of town houses, this all makes up Český Krumlov. 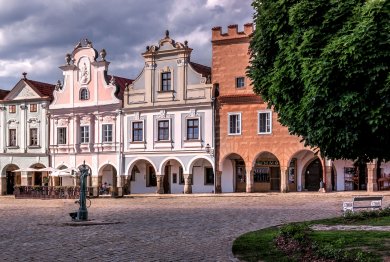 Chornitzer house is located on the most beautiful square in our country, called náměstí Zachariáše z Hradce, in Telč. Due to the fact that the historic center of the two has maintained its distinctive appearance from the days of Zacharias of Hradec it was registered in 1992 as a UNESCO World Cultural and Natural Heritage site. 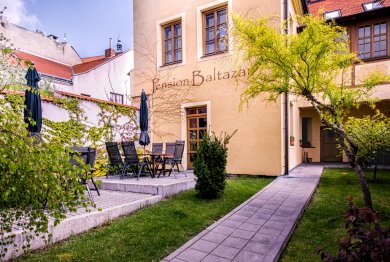 Pension Baltazar is located in the former Jewish quarter, in the lower part of the scenic Husova Street. This street is an important part of the urban conservation area. The old Jewish houses create fascinating scenery, watched over by the mighty guardian of the town, the nearby ancient Dietrichstein chateau. 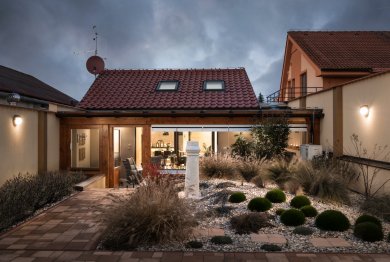 Residence Adalbert is located in the town Valtice, in the lower part of the wine street Josefská. Valtice is a small wine town and it is proud of the title „the capital city of wine“. Valtice and its surroundings is a part of the Lednice-Valtice Area that was registered in the UNESCO World Cultural Heritage Index.

Towns with a scent of the south 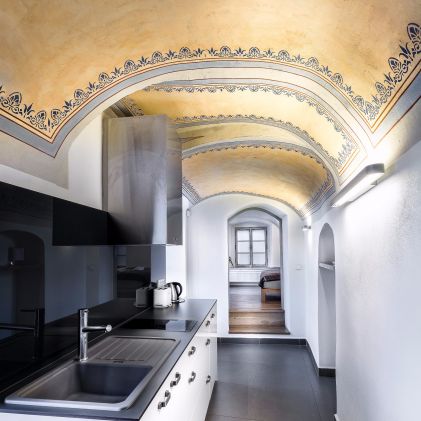 Investment into the historic houses in these ancient cities, situated in the southern part of our country, was made deliberately with the intention of showing our guests the beauty of the architecture of these buildings, which were created over the centuries. The reconstruction was performed so as to preserve all of the historical features and the typical architectural character. In Telč and Ceský Krumlov a Baroque style and in Mikulov late-classicist, in Valtice was the aim to preserve the genius loci of the historic wine cellar. When they were modified for accommodation it was our intention was to achieve ultra-spacious apartment, which will provide our guests with comfort, a family atmosphere and an undisturbed stay. It is not our aim to create subjects with a large accommodation capacity. An important part of the project was to preserve the spirit and the remarkable atmosphere of the individual houses. Their scenic beauty is also enhanced by the fact that they are located in charming urban units, urban conservation areas, whose significance was awarded by their inclusion in the list of UNESCO World Cultural and Natural Heritage site. 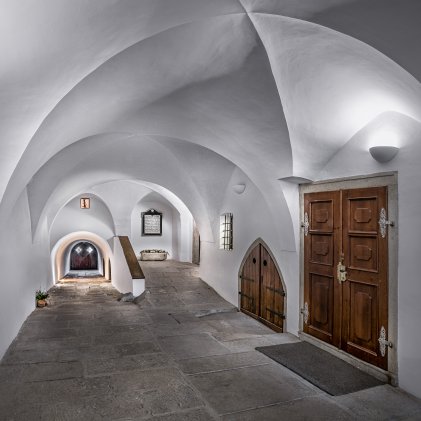 The town, living peacefully outside the busy center has not been influenced by modern times associated with the development of industry and retains its renaissance and baroque seal. The captivating charm of the extraordinary architectural values of individual towns is multiplied by the beautiful nature surrounding these unique treasures. Vltava, Šumava, Vysočina, Pálavské vrchy, Lednicko-Valtický, they are countless national nature reserves and protected territorial units. Builders, who stood at the birth of the towns, could not find a more beautiful setting for their designs. At the beginning of this story we wrote about the fact that our historic houses are located in seemingly unrelated and very remote locations. The main goal has always been to acquire and reconstruct houses that have their shape, their spirit and can serve our intention to provide romantic accommodation in houses with a rich history and unique family atmosphere. 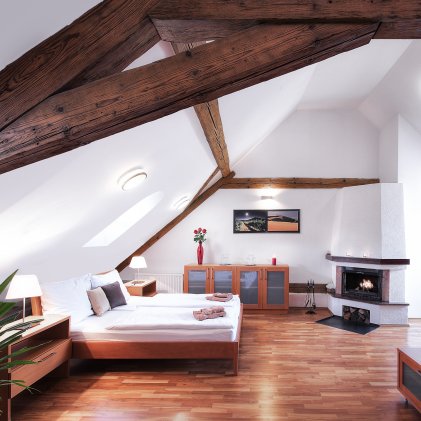 With hindsight, after studying the historical sources of the individual towns, we were astonished to see that they have much in common and our fascination with these towns may not have been accidental. Judge for yourself. The basic element of the towns of Telč and Český Krumlov is that both towns were built by noble families originating from the most famous and most powerful family in Czech history. From the famous Vítkov family. Noble families of the Lords of Hradec, Krumlov and Rožmberk left their decisive mark on the beauty of these towns. In 1447 there was a relational connection between the towns due to the marriage of the ruler of Mikulov and Valtice Jan of Liechtenstein with Perchta of Rožmberk. This sad marriage allowed the “White Lady” to exercise her influence on Telč, Český Krumlov as well as Mikulov and perhaps also in Valtice. All of these towns are surrounded by water. Český Krumlov Vltava, Telč a system of ponds, Mikulov Novomlýnské reservoirs and Valtice is situated near Lednice ponds. All of the towns are quietly overseen by guardians in the form of magical and legendary hills. 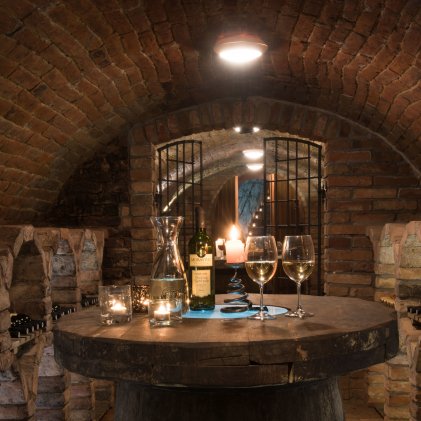 Mikulov lies in the shadow of Svatý kopeček, Český Krumlov is overseen by Křížová hora and Kleť. Telč is situated near Javořice, the highest mountain in the Czech and Moravian highlands. Valtice kindly oversees the hill Reisten with a monumental neoclassical colonnade of the same name. The architecture of towns is significantly influenced by Italian artists. There is therefore no coincidence that when walking through the streets of the towns you feel the atmosphere of Italian cities in the air. Telč is not called the Moravian Venice for nothing; likewise, Mikulov is said to be the northernmost outpost of the southern regions, in which the Sun found lavishly generous affection.

So welcome to our town with a scent of the South. Take full advantage of our hospitality and the unique atmosphere of our houses with soul...

Who is responsible for houses with soul?

Specifically, people who manage to turn their dream, their idea into reality. As luck would have it, at the end of 2006 we had the opportunity to experience the beauty of Telč. My wife and I were so impressed by this scenic fairytale town that we decided to try to enjoy its beauty not only as tourists but also as owners of one of the magnificent buildings on the square. The opportunity arose in 2007, when we bought the historic house No. 56, we could look further into its history, the development of the building and in particular the fate of the people who lived there for centuries and created the home. Every generation left their indelible architectural footprint, their story and their spirit. All of this had a large effect on us. An important milestone was the year 2008, when my wife and I ended our long-term employment, and we thought about the next chapter in our lives. Our older son Michael finished college and was looking for employment. Then came a decision to try to run a family business in tourism and turn our fascination with ancient places with genius loci into a hotel project in historic buildings. In 2009, we managed to obtain more historically valuable buildings in Český Krumlov and Mikulov. 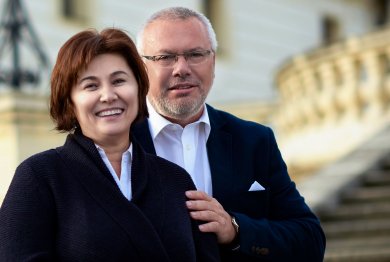 the family team played a decisive role in the project implementation, which was strengthened in 2011 by our youngest son Martin. Nevertheless, we would like to mention some of the partners who significantly contributed to the project. These are in particular the architect David Maliňák who designed the interiors of our houses in Telč and Český Krumlov, Mr. Vaclav Pelikán from the construction company Status Pelhřimov and Mr. Karel Mikala from the joinery KMT Míškovice. The dictionary tells us that genius loci is a Latin phrase meaning “the spirit of a place”. In Roman mythology genius loci was a spirit or god, protecting a certain place. It is now almost 15 years since our fascination with ancient places spawned the idea to invest in a historic home with a soul. It seems that Roman mythology did not lie and our idol still stands with us. Evidence of this can be seen in our satisfied and returning guests. We believe that this will continue. We obviously also have to attribute ourselves, the whole family, to providing a helping hand in this. We must preserve our idol.

Websites use cookies to provide services, customize ads, and analyze traffic. Use the following option to enable all cookies or just use the ones you need to use the site.